Home » About us » The Fire Service » Fire stations » Malvern 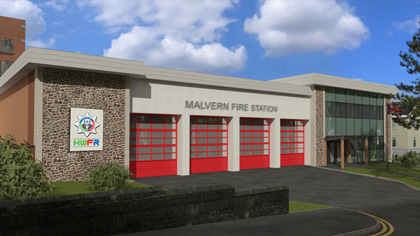 Malvern Fire Station provides cover for Malvern and the surrounding villages of the Malvern Hills District. This area includes the Malvern Hills range, both an area of outstanding natural beauty and scientific interest.

The station has two fire engines; a Scania fire engine and a Dennis Sabre fire engine, which both carry crews of up to six along with firefighting and rescue equipment. In addition to this, the station is also equipped with a Mercedes sprinter vehicle as well as a Land Rover and an Argocat that are both used for off road firefighting and the transporting of personnel, casualties and equipment in remote locations.

Malvern Fire Station is home to the only Command Support Unit in the Service, which is used for large and specialist incidents. The station also provides a home for the Red Cross Fire Emergency support vehicle.