Home » About us » The Fire Service » Fire stations » Hereford 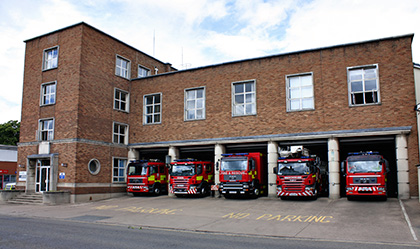 Hereford Fire Station responds to incidents in around the city of Hereford, which is predominantly an urban environment with a number of heritage buildings. The River Wye bisects the city and is used by locals as well as a large number of tourists.

The station has a MAN fire engine, a Scania fire engine and a Land Rover off road firefighting vehicle. The station is also equipped with a Scania ultra heavy rescue appliance, an aerial ladder platform for rescues and firefighting and a hazmat decontamination unit, which responds to incidents involving hazardous materials. The station also has a swift water rescue team that respond in a water rescue vehicle with 2 rescue boats and a rescue sled.

On-call drill nights are held at the Fire Station every Thursday commencing at 7:00pm.