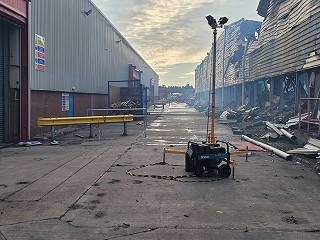 Chief Fire Officer Jon Pryce has been at the scene of the #HooFarm fire again this morning with ACFO Guy Palmer and the pictures he has taken show the extent of the fire and its aftermath.

"The main photo shows the amazing work done on Monday protecting the business next door when the wind was pushing the fire on to it," he told his Twitter followers.

"This business was back running next morning less than 24 hours after fire started.

"The second picture gives an idea of the size and scale of the fire and also shows the plant machinery @HWFire have bought in to fully extinguish the fire as quickly as we can and support our crews in accessing the middle of the scene.

"The final picture shows the other side of the building in Kidderminster."

CFO Pryce confirmed that HWFRS crews will be on scene 24 hours a day into next week working hard to fully extinguish the fire and hand the site back to owners.

"All other businesses around the scene are now able to open," he said.