Home » News & Events » 2021 » October » Kidderminster pupils get a realistic insight into staying safe on our roads in hard-hitting “Dying to Drive” workshop.

Kidderminster pupils get a realistic insight into staying safe on our roads in hard-hitting “Dying to Drive” workshop. 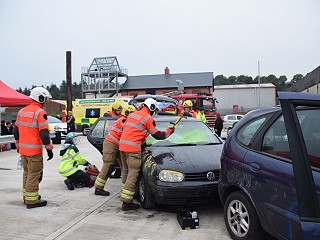 The presentation formed part of this year’s busy programme which has reverted to its original format this year, after being delivered on-line last year due to the pandemic. It has been staged at a number of locations around the Herefordshire and Worcestershire including Leominster Police Station and the Fire Stations in Worcester, Bromsgrove and Wyre Forest.

The scheme aims to reduce the risk of death and serious injury amongst young road users as they start to travel independently in cars or on motorbikes with other young adults. Having operated for well over a decade, it is supported by several departments within the Service and facilitated by Service volunteers and partner agencies such as West Mercia Police, West Mercia Police Road Safety Team, Herefordshire Road Safety and the ELY Memorial Fund.

Since the scheme’s inception, attendance by schools and colleges has grown significantly, culminating in around 3,000 pupils taking part every year across the two counties.

In an action packed morning, the young people watched a multi-agency rescue demonstration, simulating the extrication a ‘seriously injured’ casualty from a crashed vehicle, before taking part in interactive workshops detailing the ‘fatal four’ causes of road traffic collisions and injuries: speeding, mobile phones, not wearing seat belts and drink and drug use.

The workshops explored the concept of how poor choices made by road users can have tragic consequences, and demonstrated to those attending the necessary skills and knowledge they need to stay safe on the road - whether as passengers, drivers or cyclists.

"It was excellent to see such a large turnout of pupils to this very important event, which was an opportunity for them to see and hear for themselves the hazards of road travel and how to guard against them. They took the opportunity to ask lots of questions and hopefully benefited from the interactions. I’m really grateful to our fire staff and partners who shared their personal experiences with us and worked hard to make the day such a success.”

Commenting on what he had seen, Councillor Kit Taylor, of the FRA, said:

“This is a really important programme and an excellent chance for teenagers to learn at first hand about the risks involved in using the road, and as such real eye opener. It has given them the opportunity to hear and see examples of dangers they might not have thought of, and I would encourage all schools to sign up for it when they get the opportunity.

“I want to thank Hereford & Worcester Fire and Rescue Service for laying on the initiative and all the partner agencies who’ve supported it.”