Since 2007, Cathy Chesworth of Ewyas Harold has combined her roles as a teaching assistant, wife and mum, with her other career as an on-call firefighter with HWFRS.

On weekdays Cathy (49) works at Ewyas Harold Primary School, but her alerter means that she can be called-out and has to be at the fire station within five minutes to join the rest of the crew to attend an emergency in the village or surrounding area. Not only does she commit to being prepared to wear her firefighter's tunic, boots, and helmet for up to 120 hours per week, but she is also a Crew Commander and fire engine driver.

"A few years after having my second child we were home one day when we heard a bang – our tumble dryer had spontaneously burst into flames. Before we knew it the village fire crew was there with two other pumps close behind and the fire was out. The next day I realised just how lucky we had been to have the local crew; without them I would have lost a lot more than a few replaceable things – my family, animals and precious mementos and photos were all undamaged. This renewed my interest in joining.

"I'm lucky that my firefighter role works well with my teaching assistant job – the headteacher feels it's fantastic to have a good role model for the children to see and the kids find it very exciting when my alerter goes off: 'Clear the way, Mrs C has got a fire to go to!'"

"I've attended many barn fires, and I was at the Card Factory in High Town Hereford, which was dangerously close to the half-timbered Old House and damaged two other historic black and white houses. 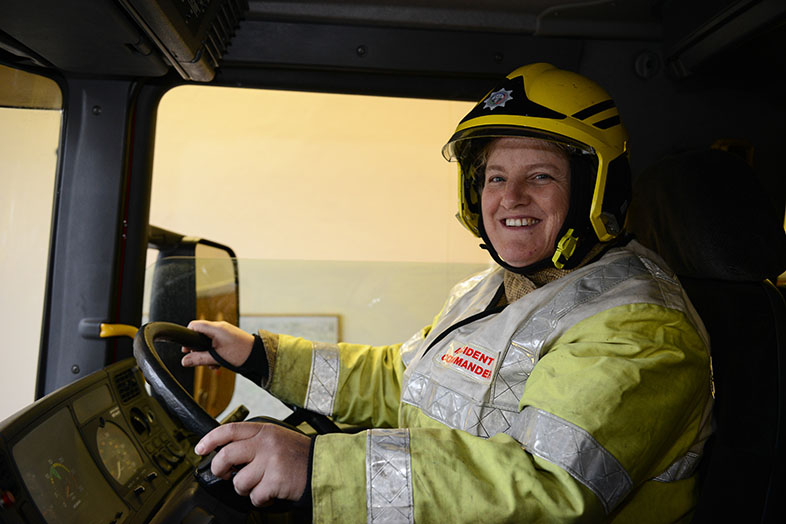 "Being an on-call firefighter also gives me a brilliant home/work balance. Although being 'mum' is my most important role, my children are also the reason I didn't consider becoming a wholetime firefighter when they were very little, because I didn't want to be at a fire station when I could have been home with them. But being an on-call firefighter gives me the best of both worlds as I can be with my kids at home, until the alerter goes off, rather than being at a wholetime fire station.

"Because most of our calls are in the local community, we often find that local residents are relieved to see us at an incident. They often open up to us – even about deaths – as they know we will deal with things respectfully.

"Keeping the on-call fire engine on the road is a challenge in a small village. Recently when our numbers were down, we all did extra to help keep the pump on the run, even if we've missed out on family time. But my kids and my husband are ok with that as they know it's to help local people and possibly even our friends.

"Although firefighting is still thought of as a very male environment, there are roles and a need for all types of people – whether they have physical or people skills. So many parents of children who have now started school are a massive untapped reserve who could give so much to their community as an on-call firefighter, and get an interesting job with a shift pattern that suits them perfectly, in return. Being a mum and an on-call firefighter really is combining the best two jobs in the world!"

Ewyas Harold Primary School Head of School, Laura Wallace said: "Cathy has further developed skills in risk management, communication, team working, leadership, self-discipline, first aid, trauma care, health and safety, and much more. She has brought all this training and experience back to her workplace.

"As a school we are very proud to have a firefighter as part of our team. As well as providing a positive female role model, we feel rewarded in the knowledge that Ewyas Harold Primary School is undertaking a vital role in protecting the local community, by supporting Cathy in her vital position as an on-call firefighter. We know she has made a difference every time she responds to an emergency and helps to save lives."