Home » About us » The Fire Service » Fire stations » Peterchurch 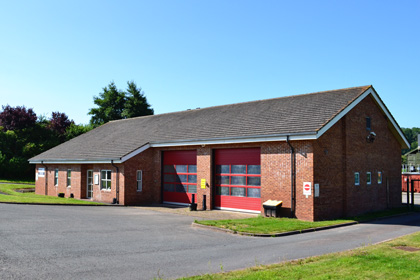 Peterchurch Fire Station is situated within the Golden Valley and covers an area of approximately 60 square miles, which is predominately rural with large areas of farmland. Some of the population resides within the main villages of Peterchurch, Dorstone and Cusop, whereas the majority of residents live in smaller villages and scattered communities throughout the area.

Peterchurch Fire Station is a retained fire station, so it is staffed solely by on-call firefighters, who respond to emergency calls whenever they are needed. As well as housing firefighters, police officers also operate from the station.

The station has a Scania fire engine which is a first-line attack engine, carrying a crew of up to six firefighters along with firefighting and rescue equipment. There is also a restricted access vehicle located at the station.

Furthermore, the Service has one of its key strategic training facilities based at Peterchurch Fire Station, which allow operational crews from both counties to train in 'real fire' conditions.

Planned training will be taking place at the Peterchurch Training Facility on the dates and times listed below.

Please note that ad-hoc training by local crews may take place in addition to these listed dates but will predominantly be on a much smaller scale and have minimal impact.