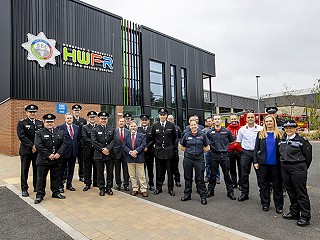 Several members of the Senior Management Board as well as representatives from West Mercia Police, Severn Area Rescue Association and contractors McPhillips gathered at the new station to watch Councillor Taylor cut the ribbon.

“I am delighted to open this new hub,” said Cllr Taylor. “This demonstrates how we are investing in the Fire Service. This fantastic modern facility places the organisation at the forefront of firefighting facilities, not only today, but also over the next 20 years.”

Cllr Taylor went on to thank all those involved, singling out Station Commander Daryl Justice, Watch Commander Len Rees and retired Watch Commander Mike Jenkins who, he said, were the main drivers of the project.

“This is a wonderful facility that delivers not only for the communities of Bewdley, Stourport and Kidderminster, but for the Fire Service as a whole,” he said.

“It’s been great to get all of the partners in the project here today to see the facility formally opened”.

“Our ambition is to make optimum use of the site and to move our training centre here, given the size and the area available we want to carry on the journey of providing first class training facilities”.

The station, which replaced the three individual stations in Kidderminster, Stourport and Bewdley, has been in operation since early 2020 with the official opening delayed because of the pandemic.