Home » News & Events » 2021 » October » Do you have enough smoke alarms in your home and when did you last check them?

Do you have enough smoke alarms in your home and when did you last check them? 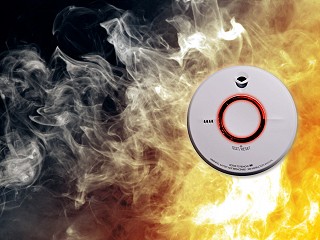 October is Check Your Smoke Alarm month in the Fire Kills campaign, so HWFRS is urging people to test their smoke alarms - research shows that only 26 per cent of all households who own an alarm test them on a regular basis.

Despite the majority of homes (over 90 per cent) having at least one working smoke alarm, smoke alarms only alerted householders to just one in every three fires in the home in England.

The most common reason a smoke alarm failed to activate was because the fire was outside its range. That’s why The Fire Kills campaign hopes that by encouraging everyone to test their smoke alarms, more deaths can be prevented.

However, one smoke alarm may not be enough to provide you with the best chance of escaping a fire in the home, say the latest fire statistics.

Most people know a working smoke alarm can save lives by providing those vital few seconds needed to escape a house fire.

The most common reason a smoke alarm failed to activate was because the fire was outside its range. For this reason, Hereford & Worcester Fire and Rescue Service (HWFRS) is encouraging people across the two counties to think about the smoke alarms in their home.

“We all need to make sure that we have enough smoke alarms in our homes and that they are in the right places. If your whole home isn’t covered, you could be leaving it to chance and, in a fire, you might not get that vital early warning.

“Most of us now have at least one working smoke alarm in our home, but early detection and warning is critical to reduce the devastation from a fire. That’s why it’s so important that you have enough smoke alarms and that they are in the right places. That will give them the best chance of alerting you and your loved ones to a fire.”

“You should ensure you have at least one working smoke alarm on every level of your home, preferably in hallways and landings. Placing smoke alarms near sleeping areas and in rooms where there are electrical appliances could give you the extra warning you need. And don’t forget smoke alarms don’t last forever.

“The power might work, but the mechanism deteriorates with time, so whether they are battery operated or wired to the mains, to work at their best they should be replaced every ten years.”

Emma Roberts also urged carers and people who support less able or older relatives to check that these homes have enough smoke alarms in the right places.

She added: “Finally, if you want to see if you would qualify for a free Home Fire Safety visit or would like any fire safety advice, please call 0800 032 1155 Option 2.”