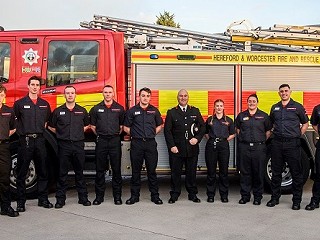 The recruits, accompanied by friends and family, were officially welcomed to Hereford & Worcester Fire and Rescue Service by Chief Fire Officer Jon Pryce at a formal ceremony at Wyre Forest station.

Training comprised a wide range of skills and expertise needed for fire and rescue work in the 21st century, including fitness, technical knowledge and the ability to handle a whole variety of situations and equipment.

Although already in post after enrolling earlier this year, their formal welcome had to be delayed due to the pandemic.

The service’s latest wholetime recruits are all at least 18, coming from a range of backgrounds across the service area, and already providing a high-quality service both day and night and at weekends, on shift patterns.

Welcoming them to the service, Chief Fire Officer Jon Pryce congratulated them on their achievements after months of dedication, hard work, training and study, reflecting their commitment to society and their determination to support the community in challenging and often life-saving emergency situations.

Singled out for particular praise were Firefighters Lisa Campbell, from Bromsgrove station, who won the Silver Axe trophy as Top Wholetime Recruit and Jake Colquhoun from Redditch station, who was named Most Improved Firefighter on the course.

After the formal ceremony, the visitors were hosted to a buffet and watched a firefighting display, giving family and friends an insight of what the new recruits now contend with. The guests also tried out some of the activities themselves!

For would-be firefighters interested in joining the service, there are still opportunities to combine their ‘civilian’ careers and lives with an exciting on-call role, providing a vital service to the community in which they live and work.

To learn more about the becoming an on-call firefighter and the rewarding challenges that come with the role, visit www.hwfire.org.uk/join-us.