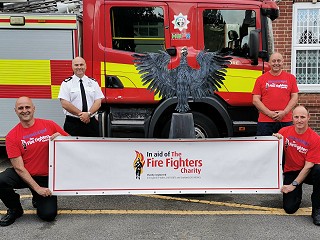 Hereford & Worcester Fire and Rescue Service (HWFRS) are offering the opportunity for businesses or individuals to bid for a one-off especially commissioned sculpture to raise money for the Fire Fighters Charity.

The 1.8 metre sculpture of a Phoenix was commissioned by Hereford firefighter Spencer Jones as a memorial to former HWFRS Group Commander Stu Crebbin, following his untimely death earlier this year after losing his fight against cancer. The Phoenix represents the incredible battle he fought, and his positivity to continue living his life as normally as he could whilst continuing to help others. Even in the middle of his treatment last year he completed the incredibly challenging Brecon Beacons 10 Peaks Traverse 24-hour Challenge to raise money for the charity that provided him with so much support during his treatment and final weeks.

The impressive sculpture, made from galvanised steel, was designed and created by ex-HWFRS firefighter and Pershore-based blacksmith Steven Ellis Cooper (https://stevecooperblacksmith.co.uk). The auction to own the sculpture is now open to sealed bids starting from £5,000, with all proceeds going directly to the charity.

HWFRS would particularly love to hear from businesses and individuals in Coventry who might be interested in owning and displaying this magnificent artwork as part of their City of Culture celebrations, as the Phoenix symbolises so much for the City.

Close friend and colleague of Stu, firefighter Spencer Jones, said: “This is a chance to own a one-off intricately made piece of artwork that would be a stunning centrepiece in any outdoor or indoor area, public or private.

“Like with many charities across the UK Covid-19 has taken its toll on the Fire Fighters Charity’s fundraising capabilities. It was Stu’s wish, with the full support of his family, that donations and fundraising activity following his passing should support the charity, and that we continue his extraordinary legacy so other firefighters and their families can benefit.

“On behalf the fire service I’d like to thank Steven Ellis Cooper for giving up his own time to create this magnificent sculpture, which represents resilience, hope and strength, everything Stu stood for.”

The launch of the auction comes just a few weeks before a team of more than 40 firefighters, and other supporters, begin this year’s Stu’s Phoenix Brecon Beacons 10 Peaks Challenge, which will now become an annual even to remember Stu and raise money for the charity that meant so much to him. Following months of intensive training the team will set off early on Saturday 7th August with just 24 hours to complete the 42mile challenge across the Brecon Beacons National Park. A Just Giving page has been set up inviting donations sponsorship for the epic challenge https://www.justgiving.com/fundraising/stusphoenixchallenge

Businesses or individual interested in making a bid for the Phoenix sculpture should email Spencer Jones with opening bids starting at £5,000 – sjones@hwfire.org.uk