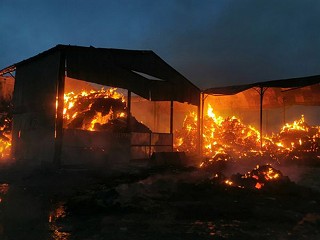 Hereford and Worcester Fire and Rescue Service were called to a serious agricultural building fire in Kings Pyon, near Hereford at around 13:03 on Monday, 18 January 2021.

The fire was in a large agricultural building comprising two barns approximately 120m by 120m containing 500 tonnes of straw. Livestock in the barns were all evacuated.

The fire was fought using four hosereel jets and two main jets supplemented by a water carrier and a dam.

There were no casualties.

Crews from Worcester and Tenbury Wells were still in attendance on site on Tuesday morning maintaining a watching brief, before this was scaled back to one crew from Eardisley.

“Throughout the afternoon and overnight, crews from multiple stations worked alongside the owners to contain the fire and prevent fire spread to numerous adjacent barns. All farm stock was safely moved to adjoining fields by onsite staff before our arrival.

“We continue to have a crew on site and are working with the owner to bring the incident to a close.

“We would like to thank members of the public for their help and assistance throughout the incident.”