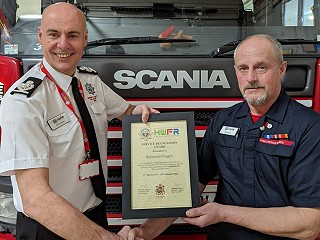 A Pershore firefighter is standing down after giving a quarter of a century of service to his community.

But Ray Haggitt’s connection with the fire service goes back even longer as he first signed up with the former Hereford & Worcester Fire Brigade in around 1989 and served for about four years, providing cover at the old station in Pebworth.

“Ray joined Pershore Fire Station in 1997 after moving to the town in 1994,” said Pershore’s Watch Commander Justin Challenger. “He has provided night and weekend cover for all of his career at Pershore.

“Ray leaves us as the longest serving member of the team at Pershore, having passed on a wealth of knowledge and experience.”

“A local artist painted a picture of Ray helping a local resident to safety out of an inflatable dinghy outside Pershore Fire station while the station and surrounding area was in flood in July 2007,” said WC Challenger. “Today this painting takes pride of place in the watchroom at Pershore.

“Ray is still working for his main employer in ground maintenance and is retiring from his firefighter role to spend more time at home with his family, to get more undisturbed sleep and a chance to enjoy his Saturday night takeaway without being called out halfway through!”

Ray, who retires from the fire service on February 28, was presented with a certificate to mark his retirement by Deputy Chief Fire Officer Keith Chance who thanked him for his service at a ceremony at Pershore Fire Station.