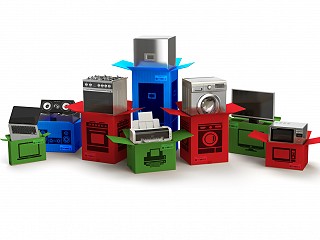 As we return to the new normal, during Register My Appliance Week, Hereford & Worcester Fire and Rescue Service (HWFRS) is reminding households to look around their homes and register the more than 100 million older appliances that helped sustain and often entertain them through lockdown.

Our kitchens have been special over the past year. With the aid of several important appliances, not only did they keep everyone clean and fed, but they also provided a space for some magic and fun in difficult times.

Yet recent government research[1] has revealed 49% of people never registered their products, and the domestic appliances - used in essential tasks such as cooking and refrigerating food, washing laundry and dishes and vacuuming - total more than 210 million[2].

As part of the Fire Kills Campaign, HWFRS is encouraging people to make their homes safer by registering machines at registermyappliance.org.uk to ensure all their home appliances – particularly older previously forgotten ones - can be located if a safety repair is ever needed. Nearly 60 leading brands are represented on the portal, developed by the Association of Manufacturers of Domestic Appliances (AMDEA), with most makes welcoming details of products up to 12 years old.

HWFRS Prevention manager Emma Roberts urges the public to register products that helped them through lockdown, as well as any others in their homes.

“With restrictions relaxing, while we are still near our kitchens, it’s a great opportunity to remember to register all the indispensable appliances – particularly older ones – that kept us ticking over during lockdown,” she said.

“They should never be taken for granted - nor should the safety of your household. It is also vital that appliances are installed and used according to the instructions, and advice on safe usage is also available on the Register My Appliance portal.“

Our kitchens have taken on new dimensions in our lives in the past year, according to a new AMDEA survey[3], becoming unique and sometimes magical places.

The survey showed adventurous cooking was important to many. In addition to baking treats (31%) and trying new recipes (20%), a host of less traditional activities also took place. The kitchen was the hub for keeping in touch with distant friends and family for more than one in five (22%), online party central, for discos, Karaoke and quizzes for 16%, closely followed by gym bunny heaven for 15%, as well as home hair and beauty salon for a similar 15%.

For nearly one in five (19%), the kitchen was simply the heart of the home, while it was a place for fun for 13% and similarly a magical safe haven for a further 13%. The kitchen also served as the new office for 10% nationwide -- a figure which rose to 20% for homes in London.

Meanwhile, our home appliances provided a mainstay, working harder than ever. Most notably fridges and freezers were packed to cut down on supermarket shops by nearly half the nation (43%), followed by cookers and hobs deemed crucial by 38%, as everyone mainly ate at home and even batch-cooked for other days. Nearly one in four homes (24%) ran their washing machines much more to launder clothes and towels; tying with vacuum cleaners which were also rated very handy for the constant clear-ups by nearly a quarter of homes (24%). Not forgetting kettles and coffee machines that ran constantly in one in five kitchen-cafés (21%).

But the poll of appliance users nationwide, in both rental and owned properties, also revealed most respondents (83%) did not know or did not think they could register an older appliance in use in their homes, that they had not purchased themselves. This included equipment they found in their homes when they moved in, bought second-hand, or inherited from family or friends.

[3] All figures unless otherwise stated are from OnePoll. Total sample size 2000 UK adult home-owners or renters. The survey was carried out online between 25 and 26 March 2021.