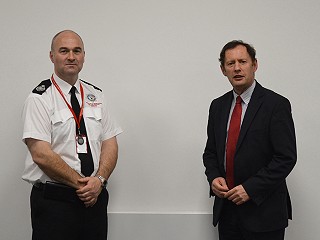 Jon has spent 29 years in the fire service and brings a wealth of experience to the role. He started his career in 1992 with Royal Berkshire Fire and Rescue Service before moving to London Fire Brigade in 1997. Jon joined HWFRS in 2001 since then he has progressed through the ranks to Assistant Chief Fire Officer before his most recent promotion to Chief Fire Officer and Chief Executive.

Jon said: “I am delighted to be taking up the position of Chief Fire Officer and Chief Executive. HWFRS is a fantastic organisation with the most amazing workforce, which I am proud to be part of, and now lead, as we continue to build on some great work to keep the communities of Herefordshire and Worcestershire as safe as possible.”

Chairman of the Fire Authority, Cllr Roger Phillips, said: “Jon has extensive experience in the fire service sector and strong leadership qualities. I’m confident that he will make a great leader and I look forward to working closely with him in the future.”

Jon has helped shape on-call firefighter recruitment nationally and is an active member of the National Fire Chiefs Council. He has also led on a number of major incidents over the years including the wide area flooding across Herefordshire and Worcestershire in the spring of 2020.

Jon takes over from Nathan Travis who retired on 31 March 2021 after 28 years in the fire service.