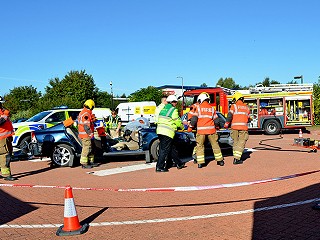 Hereford & Worcester Fire and Rescue Service’s Dying 2 Drive initiative will be making its return to more traditional surroundings after being forced on line in 2020 due to the pandemic.

The scheme, which is supported by a number of departments across the Service along with Service volunteers and partner agencies such as West Mercia Police, West Mercia Police Road Safety Team, Herefordshire Road Safety and the ELY Memorial Fund, has been operating for well over a decade. During that time, attendance has grown significantly, culminating in around 3,000 students taking part every year across the two counties.

Through these interactive workshops, Dying 2 Drive aims to reduce the risk of death and serious injury amongst young road users as they start to travel independently in cars or on motorbikes with other young adults.

This year’s programme takes place at four sites across Herefordshire and Worcestershire beginning at Leominster Police Station where 11 Herefordshire schools will be taking part in the week from 13/17 September.

Station Commander Bob Sproat of the Dying 2 Drive Team said: "The initiative has been running for well over a decade, during which time thousands of young road users have benefited from the interaction and advice given by those involved. We are very grateful to all of our partners for their support and to those who have shared their personal experiences with us.

"Focusing on the fatal four causes (speeding, mobile phones, no seat belts as well as drink and drug use) of road traffic collisions, the workshops explore choices and consequences of poor decision making, giving those attending the necessary skills and knowledge to keep them safe on the road."

The scheme is aimed at Year 11 students who will who will be road users already – whether pedestrians, passengers or cyclists and may soon become young drivers