Home » About us » The Fire Service » Fire stations » Ledbury 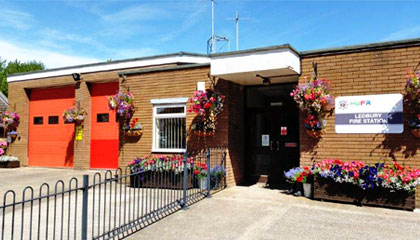 Ledbury Fire Station serves a population of nearly 10,000 people and is situated in the heart of the town on Bye Street. The town has a rich heritage of half-timbered buildings, but also has more modern buildings and is the home of close to 400 commercial premises and businesses.

Ledbury Fire Station is a retained fire station, so is staffed solely by on-call firefighters, who respond to emergency calls whenever they are needed.

The station has a Scania fire engine, which is a first-line attack engine, carrying a crew of up to six firefighters along with firefighting and rescue equipment.

The Ledbury crew are trained to use water carriers, which are used during large scale incidents.

On-call drill nights are held at the Fire Station every Monday commencing at 7:00pm