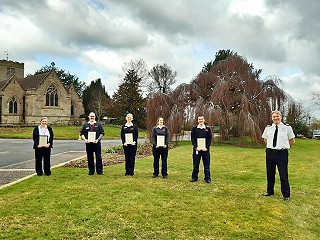 The heroic roles played by five members of Fire Control in rescuing a woman and her two-year old child during the flooding following Storm Dennis were recognised last month.

On 16 February 2020, during the height of the spate conditions in the early part of the year, the Fire Control team played a key part in providing information for and guiding a crew from Kington Fire Station, who entered the water at Letton, to rescue a female driver and her child who were stuck in the car.

In rising water, the crew made contact with the vehicle’s occupants and carried them to safety.