Home » News & Events » 2021 » July » “If you care about your community, and looking for flexibility, becoming an on-call firefighter is a decision you won’t regret.”

“If you care about your community, and looking for flexibility, becoming an on-call firefighter is a decision you won’t regret.” 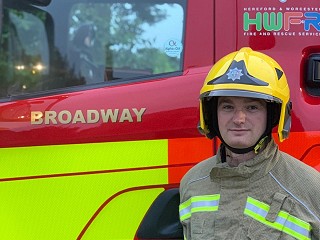 For 27-year old James Yarnold the decision to become an on-call firefighter is one that has given him unexpected time back with his young family, in the knowledge that he is also helping his community.

James, who lives in Broadway nr Evesham, has spent the last eight years working fulltime as a security guard at a retail outlet in Evesham, a job that he continues to successfully combine with on-call firefighting. It was whilst on his security shift that he met two on-call firefighters who regularly bought lunch from where James was working. After striking up a conversation with them about what the on-call firefighter role encompasses, together with stories from the fire station, James’ interest was sparked and led him to apply to Hereford & Worcester Fire and Rescue Service (HWFRS) online.

James’ experience as a security guard meant that he had valuable skills he could transfer to the fire service. From dealing with aggressive and challenging behaviour to first aid skills; trauma training to experience of working in the local community – these were all skills and experience that would support his on-call application.

He qualified in February 2021, following an intensive four month training period, however James had concerns that his mild dyslexia might have held him back as part of the training period but his worries proved to be unfounded. He said: “I’ve always kept myself very fit so the physical side of the training demanded for the job didn’t worry me, however, as part of the training you do have to undergo numerical and other written tests which I sometimes struggle with. I really had no need to worry; the fire service understood and provided support where and when I needed it ensuring I successfully passed, which I am really grateful for.”

Incidents on-call firefighters are called out to are wide and varied, however, James’ first big test came not long after first qualifying – a major thatch fire at a house near Pershore. Fire engines from all over the two counties were called to the incident, with the Broadway crew being second on the scene. James said: “The magnitude of this particular fire felt quite daunting when I first arrived, but my training with the support provided by the senior members of the crew gave me the confidence I needed to assess the situation and act accordingly to help bring the fire under control.

“Despite the seriousness of the situation, and the activity around, what really impressed me was that the Area Commander, who I had never met before, took time out to check on me knowing that I was newly qualified. There’s camaraderie when you join the fire service, and you know that everyone you work with has your back, no matter what rank they are.”

To James’ surprise the role has actually given him back more quality time with his young family. Whereas before he used to take up overtime shifts in his security role to top up his income, at the fire service he is now required to be on standby, in the knowledge that he could be called out at any time and will have to remain with five minutes of the station. However, this extra time on standby at home means he actually spends more time with his family, instead of having to do overtime at his security workplace.

James concludes: “If you care about the community you live in, live within five minutes of a fire station and are looking to top up your income whilst working flexibly around the hours of your existing job and family then I’d urge anyone to consider becoming an on-call firefighter – it’s a decision you won’t regret.”